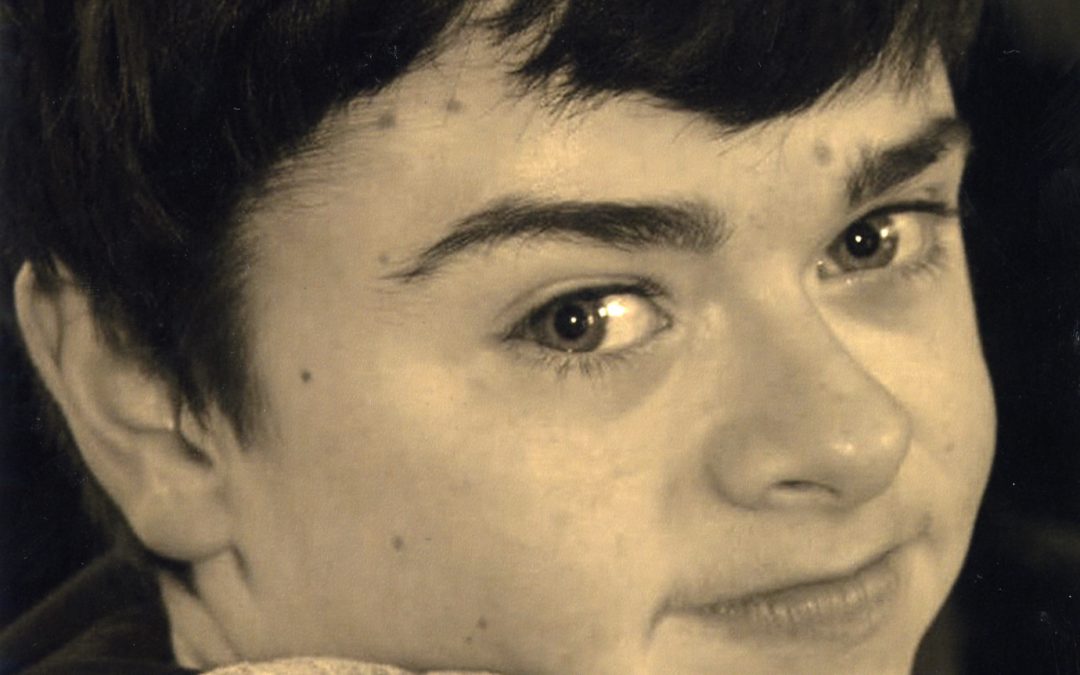 Today is International Epilepsy Day. It is a special event organised by the International Bureau for Epilepsy (IBE) and the International League Against Epilepsy (ILAE) which promotes awareness of epilepsy in more than 120 countries each year. Every year on the second Monday of February people join together to celebrate and highlight the problems faced by people with epilepsy, their families and carers.

Giving people living with epilepsy a diagnosis is one of the three pillars of FutureNeuro. When we launched our Centre in November 2018, we were privileged to have Colette Delahunt tell us about her son Sean and their journey to a diagnosis – a reason behind Sean’s epilepsy.

Read on to hear the impact that diagnosis has had on Colette, Sean and their family. 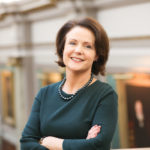 My name is Colette Delahunt and I’d like to tell you about our eldest child Sean.  It’s a difficult story but it is a story that will hopefully demonstrate how incredibly important research is and how support for that research can transform lives and create great hope.

Sean came into the world 19 years ago and like all new parents we were ecstatic and utterly besotted. I had had a trouble-free pregnancy, most of which was spent in the U.K as I am an opera singer by profession and I was busy performing there and commuting home. After a difficult delivery he finally arrived and we were totally smitten.

For the first 4 years of his life we rejoiced at every milestone reached and were thrilled with how he thrived. He was healthy and happy and after 3 years we welcomed his little sister Amelia to our family. 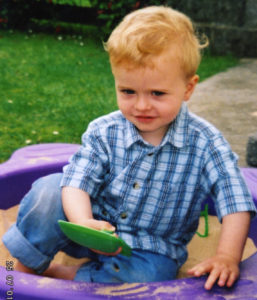 Sean had his first seizure.

We experienced utter raw panic as our little boy turned blue and struggled to breathe. As an ambulance rushed us to hospital that day, little did we know that an exceptionally difficult and painful phase of our lives had just begun. That journey was the start of weekly frantic journeys to both Crumlin and Tallaght.

Seizures had arrived into our lives unannounced and uninvited.

We heard unwelcome words like ‘tonic-clonic’, ‘myoclonic’ and most alarming of all ‘Epilepsy’. After a few months the weekly seizures became daily seizures, medication was introduced and Sean had his first EEG. 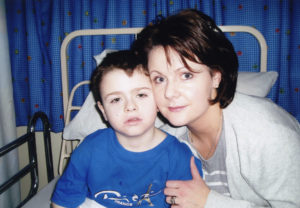 9 months after Sean’s first seizure, he was admitted into Crumlin Hosp where he remained for 10 weeks, he was experiencing anything up to 40 seizures a day at this stage, myself and Liam were totally powerless as we witnessed the horror of uncontrollable seizures. For the first time we started to see the effects this was having on our precious little boy, he descended into what can only be described as a ‘seizure fog’, lapsing in and out of the whole spectrum of seizure types including non-convulsive status which could last for hours.

He was confused and withdrawn, and we were devastated.

During this time we craved an explanation. Why did this happen? What was causing this to happen? How can a healthy boy become so utterly transformed?

We naively assumed that it was only a matter of a diagnosis and then a cure and then life would resume as normal.

Dr Webb and his team in Crumlin tirelessly investigated Sean’s situation. He was rigorously tested and re-tested, scanned, assessed and monitored. All avenues of diagnosis were explored but nothing revealed the origins of Sean’s deterioration. The best we had was ‘Intractable Epilepsy’ – unexplained epilepsy and that would remain his diagnosis for well over a decade.

More and more medications were added and everything started to take its toll on Sean. He was acutely unwell.

His childhood had been suspended…

Replaced with days and nights that were plagued with seizures, injuries from seizures and recovery from seizures, often ending up in ICU and hospital for weeks at a time.

At about the age of 7 we started to see developmental regression. This was one of the hardest things for us as parents to witness. The natural order of things is that your child always progresses forwards no matter how slowly, but to see regression is heart-breaking. It was at this point that I feel myself and Liam began to grieve for Sean. I couldn’t look at his baby photos or talk about the first 4 wonderful years of his life because it highlighted to painfully what we were losing. Myself and Liam had to force ourselves to let go of our expectations and dreams for Sean. 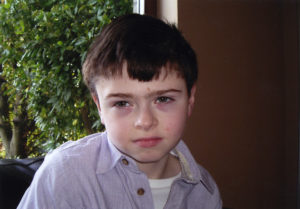 The ones we had cherished and nurtured from the moment he arrived into our lives.

We were told that Sean had Global Developmental Delay. A vague umbrella term with a myriad of potential causes and he was started in a special education school.

It took me years even to use the term “special needs”.

Over the years Sean has been tried on 15 anti-epilepsy drugs in multiple combinations, he’s had brain surgery to remove an area of the right frontal lobe, he’s had a Vagus Nerve Stimulator implanted. We’ve tried the Ketogenic Diet, steroid treatment and he was sent to Great Ormond Street in London for further investigations. All of these endeavors proved unsuccessful. We found it so difficult to reconcile how Sean’s epilepsy, a condition that many people live with successfully, had been so utterly catastrophic to him.

We knew there had to be something else going on…. something we were missing.

The years that followed brought a steep learning curve for myself and Liam and all the family. We became resentful epilepsy students learning everything we could about seizures, brain anatomy, medication and research in the hope that we would find something. 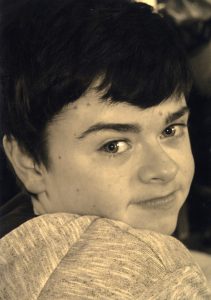 One of the most distressing consequences of having no definitive diagnosis is that you try to find one for yourself and that is often a bad idea. We analysed every chapter of Sean’s first 4 years to try and find a cause. We questioned and fretted over every possibility from the plausible to the ridiculous.

Was it the bad ear infection he had at 6 months? Was it the nasty fall he had at a year? The tumble off his trike when he was two? Was it the birth?Was it too prolonged , had something gone wrong? Perhaps I shouldn’t have flown during pregnancy. I even worried that the loudness of the opera had somehow impacted him!

The list was endless, and the blaming and guilt caused a lot of distress to all of us.

Another consequence of a lack of a diagnosis is that Sean didn’t quite fit the criteria for services.

We spent years battling and begging to access therapies.

Part of my search led me to hear about the pioneering work that was being done in Genomic Sequencing. I was particularly inspired by an Epilepsy Ireland talk that was given by the American Geneticist Tracy Dixon-Salazar a few years ago about her quest to help her own daughter who had a severe epilepsy condition. I had a real conviction that this was something we had to explore. So two years ago, when our consultant Dr. Colin Doherty mentioned the Lighthouse Pisces Project, a collaborative genetic clinical research study into severe epilepsies with accompanying intellectual disability, we absolutely jumped at the opportunity of Sean being one of the 50 candidates to be studied.

Sean was enrolled into the study and 6 months later, which is just over a year ago now, we were met by the Lighthouse team and Dr Maire Greally delivered absolutely incredible news to us.

Sean did indeed have an underlying genetic basis to his condition.

Sean has a rare non-inherited mutation of the CHD2 Gene, his seizures and his developmental impairment being a direct result of this genetic fault. This information for us was profound, we finally had our information after waiting 14 years. Having a diagnosis was a tremendous relief for us. The blaming and the agonizing was over. It was very emotional for us and for the whole family to finally understand and to start to try to accept what had happened to Sean. It didn’t obviously give us an immediate cure but it delivered to us something incredibly precious…

Hope that the valuable research that is being carried out by FutureNeuro can help develop individualised treatments and precision medication targeted specifically to this gene in the future.

Hope that the gathering of data about this particular gene mutation will inform medics, patients and carers as to what medications, treatments, diets and therapies are most successful at helping a CHD2 patient to become seizure free. The earlier seizure freedom can happen, the better the cognitive outcome.

Hope that other children like Sean will get early routine access to Genomic Sequencing to avoid the anguish that the absence of a diagnosis causes.

Hope for our other two children, Amelia and Peter. Knowing that Sean’s condition is non-inherited and won’t impact on them or their children in any way is such an immense relief for us.

I’m now part of a growing number of parents, carers and researchers worldwide, who are actively sharing information through a dedicated CHD2 Facebook group.

The Patient Portal and Electronic Patient Records which are being developed by the eHealth strand of FutureNeuro will be a great resource for this vital gathering of information.

I would like to thank all those involved in the Lighthouse Pisces Project and FutureNeuro for giving us that hope.

Well if you could meet Sean today he would probably have hugged or high-fived you by now! He has an abundance of love and joy in his heart and is by far the bravest and most courageous person I know.

With the help of our consultant Dr. Colin Doherty, Sean’s seizures are better controlled than they have ever been.

That is our goal.

But at least in the last few years he has had an opportunity to embrace life and explore his potential.

We are on a journey and hopefully with research that journey will be brighter. 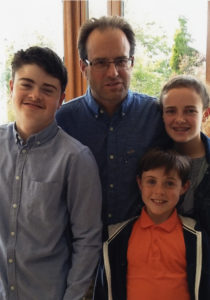