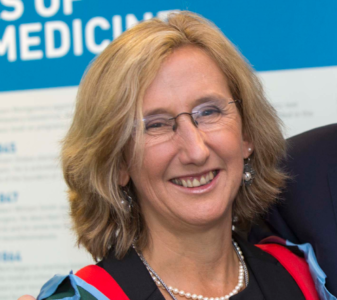 Orla Hardiman
Principal Investigators, Trinity
Orla Hardiman is one of only two full Professors of Neurology in Ireland. She is Head of the Academic Unit of Neurology at Trinity College Dublin and Consultant Neurologist at Beaumont Hospital, where she is Director of the National Amyotrophic Lateral Sclerosis (ALS ) service . The clinic provides direct clinical care for over 80% of Irish patients with ALS. She is the Director of the Irish ALS/MND Register, which has been in continuous operation since 1995 and is the longest running population based register of ALS/MND in the world. Hardiman was Academic Director of Trinity Biomedical Sciences Institute from 2015-18, and then took up the role as National Clinical Lead in Neurology for the Health Service Executive in early 2019. She leads a research group of over 45 individuals in Neurodegeneration, with particular focus on ALS and frontotemporal dementia. Her research group focuses on epidemiology, deep phenotyping, biomarker discovery, imaging and signal analysis and population genetics of ALS, and on early phase clinical trials. She is Co- Chair of the European Network for Cure of ALS (ENCALS), a senior member of the executive of the TRICALS Consortium and is Editor in Chief of the journal Amyotrophic Lateral Sclerosis and the Frontotemporal Degenerations. She is the recipient of a number of international awards including the AAN Sheila Essey Award in ALS Research, and the International ALS Alliance Forbes Norris Award. In 2018 she received a TCD Innovation Award for Societal Impact. She is one of a handful of practicing physicians to have been elected as members of scholarly Royal Irish Academy. She is the author of over 380 peer reviewed research articles and has raised over €14million in research funds. Her research is funded by Science Foundation Ireland, the Health Research Board, The American Centre for Disease Control, The American ALS Association, the British MND Association the Irish MND Association, and the charity Research Motor Neuron.
We use cookies on our website to give you the most relevant experience by remembering your preferences and repeat visits. By clicking “ACCEPT ALL”, you consent to the use of ALL the cookies. However, you may visit "Cookie Settings" to provide a controlled consent.
Cookie SettingsREJECT ALLACCEPT ALL
Manage consent